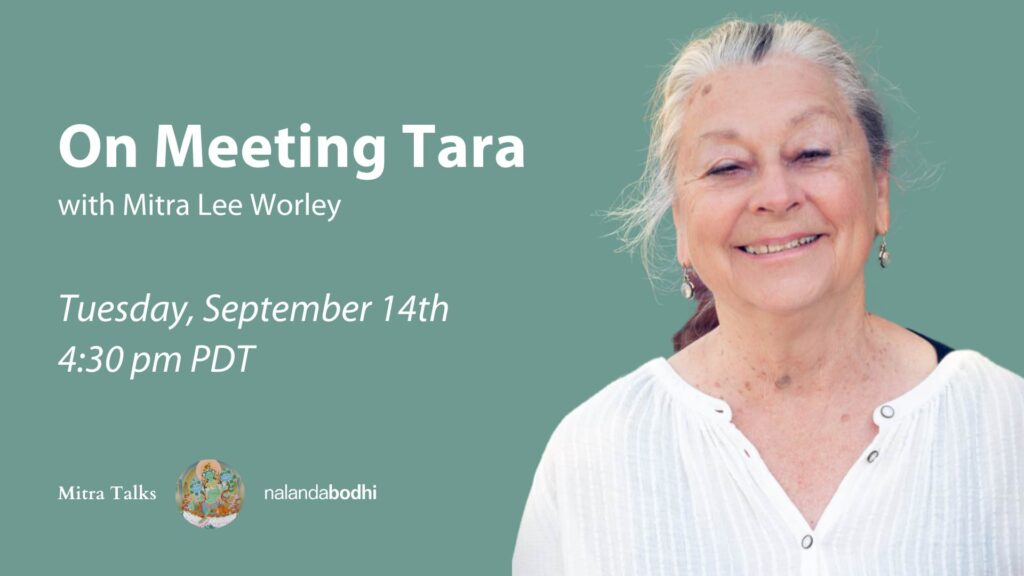 Don’t you wish that you were Tara? Tara, In essence, is Prajnaparamita, mother of all the buddhas from whose womb of wisdom all buddhas are born. Originating in ancient India, she embodies the feminine principle and has arisen in many manifestations as a guide and helper to sentient beings and a support to practitioners on the path to enlightenment. She is supplicated to pacify unfavorable conditions and increase favorable ones, in particular she especially protects from fears and sustains longevity, health, and safety in travel and transitions. Tibetan Buddhism has few female emanations that began their spiritual journey as human beings. Perhaps that is why she is so universally beloved. In her Mitra Talk this September our dear Mitra Lee Worley, who is like the embodiment of feminine power herself, will introduce us further to Tara. Let’s meet and greet her together.

Mitra Lee was born in Glen Cove, New York. She graduated from Mt. Holyoke College with a BA in English Drama, and later from The Neighborhood Playhouse in New York City. Her acting career led her to discover Buddhism in 1973 while attending a theater conference in Boulder, Colorado, where she was invited to teach acting at the Naropa Institute. While teaching, she began meditating and attending talks by Naropa’s founder Chogyam Trungpa Rinpoche.

In 1975, Chogyam Trungpa asked Lee to head the Theater Studies program at Naropa. While shepherding the theater program through its early years, she also helped launch the Ngedon School of Buddhist Studies. In 1996, Lee received an MA in Buddhist Studies from Naropa University.

Lee met Dzogchen Ponlop Rinpoche at Naropa and became his student. She took on the role of practice coordinator in Boulder, and then of national practice coordinator for Nalandabodhi. Lee was appointed as a Mitra in 2005, and currently oversees the Path of Meditation within the Mitra Council.

As a practitioner, Lee aims to be a champion of meditation both on and off the cushion. “I look for the truth that underlies the dharma,” she says, “and seek ways to bring it into moment-to-moment life beyond any dogma.” Mitra Lee lives in Boulder, Colorado, where she is a recently retired Professor of Theater and Contemplative Education at Naropa University.

Nalandabodhi is an international Buddhist community whose mission is “Offering the timeless wisdom and boundless compassion of the Buddha to inspire individuals and create kind communities in today’s world.” Using tools the Buddha offered, we provide a genuine path to a more open, kind, and full life.

Under the direction of Dzogchen Ponlop Rinpoche, our centers provide open and supportive spaces for engaging in study, meditation, and mindful activity on the journey to discover the full potential of our own mind. To learn more visit nalandabodhi.org

For questions about this event email help@nalandabodhi.org.

Registration is closed for this event.